Rómulo Herrera was badly beaten, but he didn’t know how he could pay for the medical care that would help him heal. In November 2019, the 30-year-old Venezuelan immigrant living in Peru had just been in a traffic accident with his motor taxi in north Lima. The other driver blamed him because he was Venezuelan and then beat him, Rómulo says. 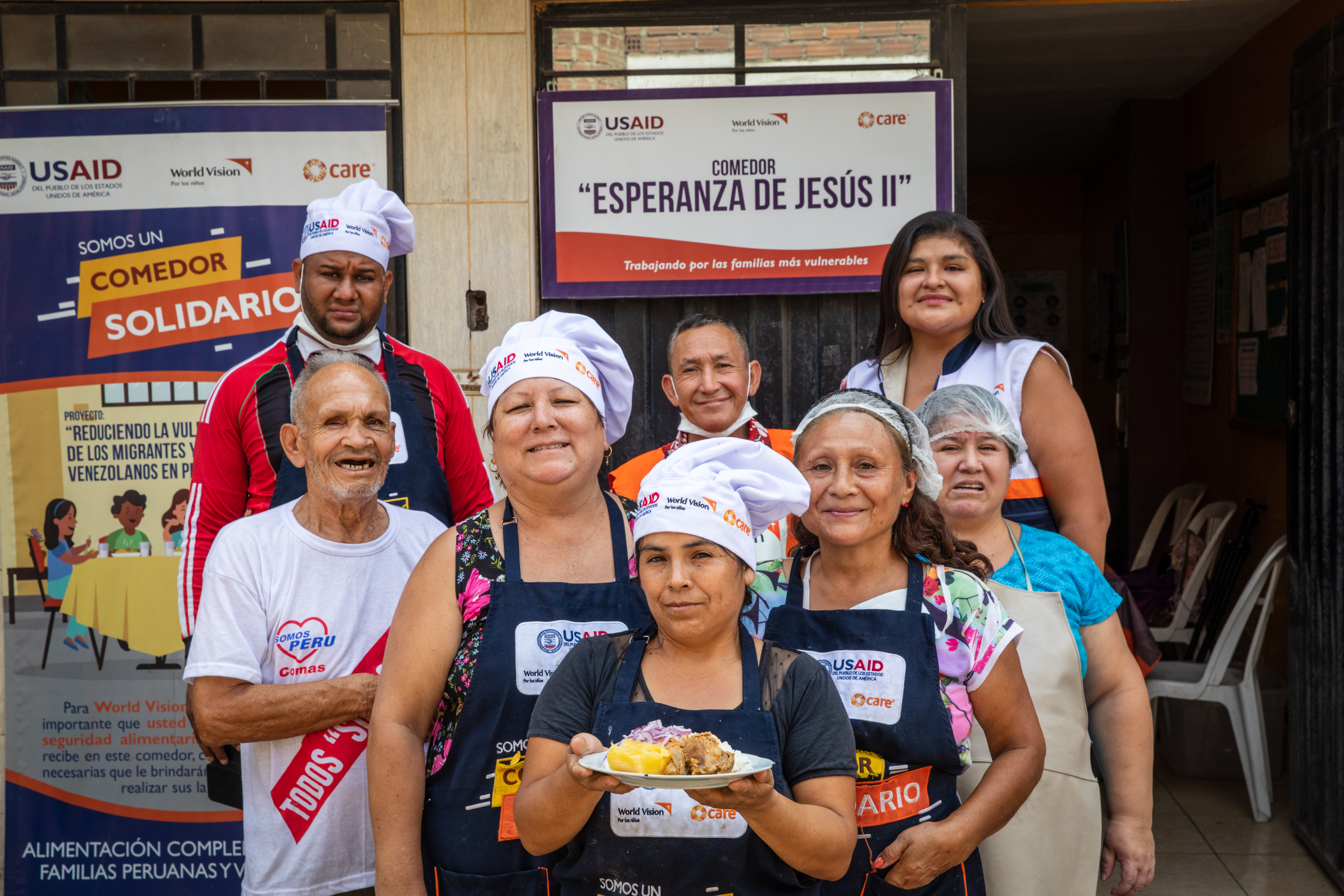 He had just recently begun volunteering in the kitchen at the Esperanza de Jesus II feeding center, which is supported by World Vision and USAID. He was out of money, new to the country, and unsure how he would get care so he could start working again.

But that is when Tania Morales, a Peruvian and the center’s founder, came to help him. She gave him money and referred him to a doctor.

“There are not many people like her,” Rómulo says. “Sometimes people want to hit you, mistreat you, even kill you because you are Venezuelan. But thanks to her support, I am here today.”

“This project has been really interesting because it has improved their quality of life,” says Tania, who has run feeding centers in north Lima for more than 30 years. “Many of them have been able to even buy their own street carts to sell hotdogs, potatoes, Venezuelan empanadas. I collaborate with them because it motivates them to press on.”

The project allowed the centers to go beyond caring for vulnerable Venezuelans’ immediate physical needs. This project caused regular Peruvians and Venezuelans to form lifelong friendships and gain understanding of each others’ cultures. These communal bonds prove that loving your neighbor is a better response to crisis than the xenophobia and negativity that has become so prevalent throughout the countries hosting the more than 4.9 million migrants and refugees who have left a crumbling Venezuela since 2016.

Karlyn Merchán, 34, from Venezuela, counts on Tania and the team at Esperanza de Jesus feeding center, too. She lives here alone with her 6-month-old baby, Karolyne, and struggles to pay the bills and feed the two of them.

“To be able count on help, as a mother, and to be able to find and meet with Peruvians and Venezuelans … it makes each day a little easier,” Karlyn says. “You have people to talk with, good food, good service, it helps you out.”

Like most beneficiaries, Karlyn comes to the center each day to carry out her lunch in containers. The line forms around noon and the kitchen staff begin filling containers with the day’s dish—usually a balanced portion of carbs, protein and fruit or vegetable, with juice, to wash it down. The atmosphere in the kitchen is focused but welcoming and happy.

“You see Peruvians helping the Venezuelans, and because Mrs. Tania includes us all, every day it’s a different person’s turn to help in the kitchen,” says Karlyn. “So you become a participant in the project. It’s not like you come and get your food and leave.”

Karlyn speaks for many others when she says the feeding center helps save them time and money, too.

“I take that time and money and dedicate it to my daughter—for her diapers and other things,” she says. “And the time is also for her. Time I would spend cooking and making lunch—I save that here (at the feeding center) and can then dedicate more time to her.”

The feeding center program also has brought dignity to those benefiting from the service.

Rómulo came to Peru from Venezuela in August 2019. Back home he used to cook. So when his neighbor invited him to come eat at Esperanza de Jesus II, he and Tania hit it off when she mentioned their need for help in the kitchen. They taught each other how to create dishes from each country.

“I started working and it was really neat,” Rómulo says. “I taught them a lot, how to make typical Venezuelan dishes, pabellón, lots of different dishes.”

A heart for serving the most vulnerable

A licensed lawyer, Tania, 51, is always looking for ways to help her community, through food, or through helping them realize their goals and dreams. When World Vision asked her to participate in the USAID feeding program, she was immediately interested, she says.

“That’s what I’m all about…helping….helping our neighbors and serving,” says Tania, who began feeding fellow Peruvians who settled in Lima after fleeing the violent Shining Path movement in the 1980s and 90s.

This USAID project was her first time working with an NGO, but she also wanted to work more closely with Venezuelans to get to know them better.

“People gossip and say a lot about them, but when you actually meet them, get to know them and work with them in person, you find out people are wrong,” Tania says. “We need to help end all the discrimination they are suffering. They don’t have jobs, their kids have needs, and thanks to this project from World Vision, their quality of life is improving.”

Romulo, Tania, and Karlyn attest to the power of one person opening their door to the stranger in need.

“Few people are willing to open the door for Venezuelans,” Rómulo says. “So I really want to say thank you to the people at World Vision, who did open a door for us here. My country is in crisis, and hopefully someday it will get better. We never thought this would happen. So I’m so thankful for the people from the United States that have supported us through this.”

A future with friends

Looking to the future, Tania says she hopes the project will be renewed. But they will carry on because the need continues in the community. She and her volunteers will continue teaching women how to prepare different foods and how to start a business with just 5 soles (about $1.40).

“This cuts their dependency and reduces violence against women,” Tania says. “It’s a really important part of our organization because there is a lot of violence in our neighborhood. We help women realize they matter. And we will continue doing this until we can’t go on anymore.”

While the struggle continues for Karlyn and baby Karolyne, they now have a good friend to walk with.

“Life has been really difficult, but (Tania) opened a door for us—the feeding center,” Karlyn says. “And wherever I see her I know I have a true friend, a Peruvian friend who helped me and so many.”

Rómulo hopes he can pass this along to his neighbors when he returns to Venezuela someday.

“Someday I’ll go back to my country and my kids will grow up,” Rómulo says. “I’ll tell them about what I lived through and what I learned in Peru. I didn’t know I would find a community like this; that I’d be here working and well. I’ve learned a lot and I’ll always have a story to tell when I go back to Venezuela. No matter who we are or where we are from, people have to work together and care for one another.”